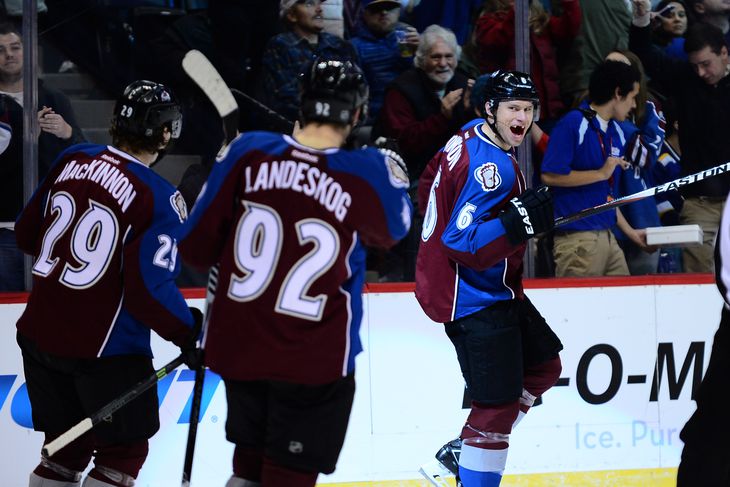 “We’re very confident Las Vegas is ready for hockey,” Foley said in an interview with Elliotte Freidman on Hockey Night in Canada.

Part of his confidence may come from his friend and NHL legend Wayne Gretzky.

The duo have been working together selling wine throughout the United States, and it seems that business discussions have detoured towards a potential NHL franchise coming to Las Vegas.

What’s up with Crosby’s swollen face? The mumps, obviously. [TorontoSun.com]

Pittsburgh Penguins star Sidney Crosby is the latest NHL player to come down with the mumps, even though he seemed to be a low-risk candidate to contract the disease.

His immunizations were up to date, and he even received a booster shot as part of his preparations to play for Canada in the Olympics in Russia last February.

When the entire Penguins team was tested for mumps, Crosby’s antibody count against the virus “was one of the highest on the team,” according to Dharmesh Vyas, the Penguins’ team physician.

The Thirty Thoughts bring up a point about a potential team in Quebec. [Sportsnet.ca]

26. Hopeful Nordiques fans weren’t buying that Quebecor president and CEO Pierre Dion was visiting the board of governors meeting solely to talk television. Truth is the NHL does this with its broadcast partners all the time.

Most of them are relaxed presentations – this is what we do, this is our look – although my former employer walked into a hornet’s nest at the 2012 All-Star Game. Dion understands the most important fact if he wants in, there is only one way to do it: the Bettman way.

Gordie Howe is reportedly “on the upswing” after suffering a setback two weeks ago in his recovery from a series of strokes.

The hockey legend’s son, Mark Howe, told the Detroit Free Press on Friday that his father is “getting better” after the 86-year-old was rushed to hospital 11 days ago and treated for dehydration.

The Stars owner has ben fined for hurting a fish habitat. [TheStar.com]

The owner of two hockey teams including the Dallas Stars has been fined $140,000 for polluting a lake during renovations of his vacation property in Kamloops, B.C.

Tom Gaglardi, 47, was found guilty of two counts of harmful alteration of a fish habitat for work done in 2010.

Gaglardi also owns the WHL’s Kamloops Blazers and heads up Northland Properties, which was convicted on the same charges. His father, Robert Gaglardi, was found not guilty.

Chris Bigras will not be representing Team Canada at the world juniors tournament. [NationalPost.com]

Canada’s world-junior journey will continue without Chris Bigras, who was among the first round of cuts despite being on last year’s team.
New York Rangers loan out Anthony Duclair but other NHL teams hold on to world junior prospects

The message from Benoit Groulx and his coaching staff to those players (and the one they seemed to receive through the tough news) was that this is a deep, difficult group to crack.

MacKinnon lives with Talbot and his wife – and their infant son. [DenverPost.com]

Max Talbot feels like he’s giving back. He lived with a billet family for three years while playing in the Quebec Major Junior Hockey League, and he made a promise to Pittsburgh Penguins star Sidney Crosby that he would look after MacKinnon.

Crosby and MacKinnon are both from Cole Harbour, Nova Scotia. Crosby, 27, and Talbot, 30, were Stanley Cup-winning linemates with the Penguins in 2009.

“I felt like I knew Nate before I met him because of Sid, and talking to Sid,” said Talbot, who was traded to Colorado from Philadelphia early last season. “And I think Nate felt the same way because he cheered on the Penguins for so long. You know, the Penguins are his team. When we won the Cup and brought the Cup to Nova Scotia, I went with Sid, and Nate was age 13 on the side of the road, waving at us. That’s pretty crazy to think about it.

This entry passed through the Full-Text RSS service – if this is your content and you’re reading it on someone else’s site, please read the FAQ at fivefilters.org/content-only/faq.php#publishers.
Want something else to read? How about ‘Grievous Censorship’ By The Guardian: Israel, Gaza And The Termination Of Nafeez Ahmed’s Blog