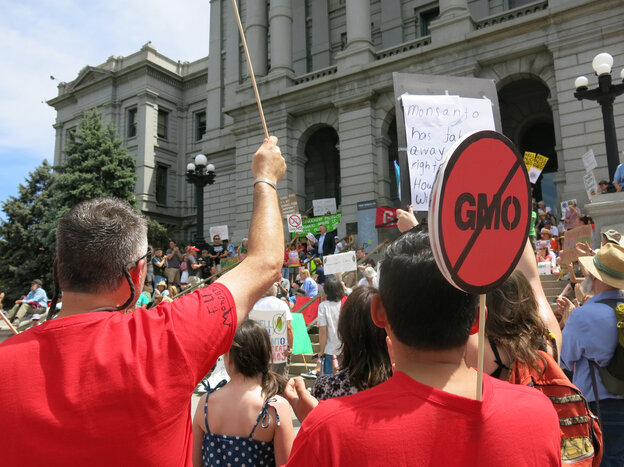 Supporters of efforts to label GMOs in foods turn out at a rally in Denverin 2013. A ballot measure that would such labels failed to pass by a wide margin Tuesday. Luke Runyon/KUNC/Harvest Public Media hide caption

An effort to label genetically modified foods in Colorado failed to garner enough support Tuesday. It’s the latest of several state-based GMO labeling ballot measures to fail. UPDATE: A similar measure in Oregon was also defeated by a narrow margin.

Voters in Colorado resoundingly rejected the labeling of foods that contain the derivatives of genetically modified – or GMO – crops, with 66 percent voting against, versus 34 percent in favor.

In Oregon the outcome was closer, with fewer than 51 percent voting against the measure. Political ad spending in Oregon was more competitive than in Colorado, where labeling opponents outspent proponents by millions of dollars.

Meanwhile, a proposal in Maui County, Hawaii, skipped the labeling debate altogether. Voters there narrowly approved a moratorium on GMO crop cultivation. The state has been a battleground between biotech firms and food activists. Some Hawaiian farmers grow a variety of papaya genetically engineered to resist a plant virus.

Polling prior to the GMO labeling vote in Colorado was scarce. Polls found Colorado’s measure faced an uphill battle in the final weeks before the election. A Suffolk University poll found only 29 percent of registered voters favored the measure, while 49 percent were likely to vote against it. A Denver Post poll was even more damning. According to that poll, 59 percent were opposed to GMO labeling in Colorado, 34 percent …read more