The Marlboro of marijuana – The Economist 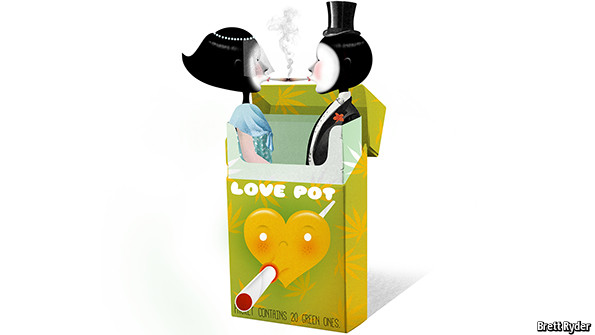 “FRESH and fruity, right?” says a bright-eyed young man behind the counter, wafting an open jar of something called “AK-47” under Schumpeter’s nose. “Whereas with this one”,—unscrewing another jar, fanning the scent up to his nostrils and closing his eyes in concentration—“I’m getting notes of dill.”

Drug dealers aren’t what they used to be. In Colorado, which in January became the first place in the world fully to legalise cannabis, buying a joint feels more like visiting a trendy craft-brewery than a drug den. Dispensaries along Denver’s “green mile” are packed with young, bearded men earnestly discussing the merits of strains with names like “Bio-Jesus” and “Death Star”. Some varieties claim to be inspirational, while others say they promote relaxation, or “couch-lock”, as the tokers call it.

Colorado’s pot industry expects to rack up sales of $1 billion this year. Across America the market is reckoned to be worth about 40 times that much. Most of it is still illegal, of course. But slowly, entrepreneurs are prising it out of the hands of crime gangs. Nearly half the 50 states permit the sale of marijuana to medical patients, which in practice may include anyone willing to fake a back problem. This week Oregon and Alaska joined Colorado and Washington in legalising it for recreational purposes, too. If other countries legalise, as Uruguay already has, it could open up a global cannabis market worth perhaps $100 billion a year (by the best guesses, which are stabs in the dark).

Who will corner that market? In Colorado a gold rush of excitement has seen hundreds of tiny firms sprout up. Just as everyone in San Francisco seems to be designing an app, everyone in Denver has an idea for a canna-business. Pot-friendly ski-chalets, taxi services and wedding planners are taking orders. Non-smokers can sign up …read more